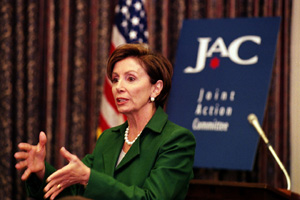 HISTORY AND MISSION
JAC is a national group committed to a strong U.S.-Israel relationship, reproductive rights, separation of religion and state, and other issues of concern to the Jewish community. JAC is comprised of three separate entities, serving as a resource for the Jewish community on political activism, the importance of elections, and Congressional activity.

JAC was founded after the 1980 election when many friends of Israel in Congress were defeated by political groups that opposed Israel and the values of mainstream American Jewry. Since then, JAC, the first national Jewish women’s PAC in the country, has become a positive force in the political process. Today JAC continues to blend its support for the U.S.-Israel relationship with a commitment to a progressive social agenda.

JAC remains committed to its core issues as well as addressing current pressing issues, such as BDS and antisemitism, gun violence prevention, and climate change.

ORGANIZATION
JAC is comprised of three organizations that engage in the political process from a Jewish perspective:

Joint Action Committee for Political Affairs (JACPAC) is a national political action committee (PAC) committed to the special relationship between the US and Israel and a social agenda that includes reproductive choice and separation of religion and state. JAC supports US Senate and House candidates who uphold this agenda and maintains an ongoing dialogue with those it helps elect. In addition, JAC serves as a political resource for the Jewish community, furnishing information about candidates, elections and issues. Click here for detailed information about membership and candidate support.

Joint Action Committee is a nonpartisan advocacy group (501c4) that promotes the United States-Israel relationship, reproductive freedom, separation of religion and state, and social policies in keeping with the core values of the American Jewish community. To promote this agenda, JAC enlists Jewish community participation in advocacy with elected officials; this includes trips to Washington, DC that feature legislative briefings by high-level experts and private meetings with members of Congress.

The JAC Education Foundation, a tax exempt organization (501c3), exists to educate and engage the Jewish community in electoral politics and issues of Jewish concern. The Foundation publishes the nonpartisan Jewish Community Voter Guide, an educational resource that identifies and explains legislative issues of interest to the Jewish community; it contains an index of the voting records of the entire Congress on these issues and suggestions for advocacy. The Foundation conducts voter registration drives and education sessions.