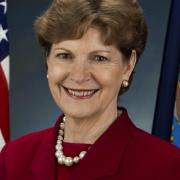 In Her Own Words

"A peace agreement with two states living side by side in peace and security is the only long-term, sustainable solution for the people of the region, and it is critical to the interests of the U.S., Israel, the Palestinians, the Arab world, and the entire region." 1

"The relationship between the United States and Israel remains unbreakable." 2

"I strongly believe that every woman should have the reproductive health care coverage she needs wherever she is and whenever she needs it." 3

Shaheen is the first female U.S. Senator from New Hampshire.

She is also the first female governor of New Hampshire.