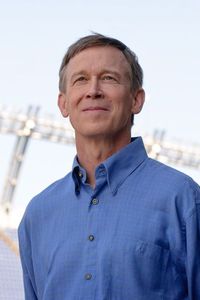 "At a time when women's rights are under attack, we need to stand tall for our values. The #HydeAmendent actively harms women by limiting access and choice. It needs to be repealed."  1

"For too long, gun violence has gone unaddressed. This epidemic calls for comprehensive reform on all fronts.​​​​​​​" 3

"Climate change is a national security issue. Climate change and resource scarcity is with us today. It's not a theory, it's a fact." 4

Was a brewer and co-founder of Wynkoop Brewing Company

Favorite movies are Citizen Kane, To Have and Have Not, and Polar Express

Was Democratic candidate for President in the 2020 race